History of Ufford, by Eric Sharpe

We are very grateful to the family of the late Eric Sharpe for allowing us to publish here his work on the History of Ufford.

The work was published in the parish magazine for ufford during the 1990's.

The dwelling Ufford Place is, unfortunately, long demolished and other houses built in its place. However, you can read all about the history of Ufford Place.

In the 5th century, Anglo Saxons began to invade East Anglia and the Suffolk coast became a separate kingdom with the Wuffingas being the ruling family. The family gave its name to the village and thus we can account for the beginnings of Ufford, a ford with a hard gravel bed over the River Deben, crossing the narrow neck of marsh and river between the higher ground of Bromeswell and Ufford. Over the years the name has changed from Juffeforda, Offewarda, Uffewarda, Ufforda, Usford and finally to Ufford.

Recorded in the Domesday Book of 1086 Ufford had 146 acres of arable land, 9 ½ acres of meadow, 14 freemen, 2 boarders, 2 ½ ploughs and 1 mill. It is believed that this is still on the same site. There is no reference to a church in Ufford, but 2 were recorded in Bromeswell and 2 at Bredfield. It is probable that one of the churches at Bromeswell could be the Ufford church.

Crown Farmhouse on the High Street is the oldest remaining dwelling in the village; a traditional Suffolk Long-house built in the 16th Century. Many other Listed buildings date back to the 17th and 18th Century and can be found throughout the village, scattered in between later housing developments.

There are 2 distinct parts to the village; the western part, where development is centered on Upper Street, which was the London to Great Yarmouth trunk road until the by-pass was built, and the original core of the village around St Mary's Church. These 2 parts of the village are linked by School Lane, and by Spring Lane.

The lower part of the village, now a Conservation Area, is a particularly attractive collection of traditional buildings, which remain somewhat hidden away. There are no main roads through this part of the village and, up until the Second World War it remained relatively isolated and un-developed. 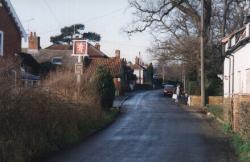 Ufford boasts some 25 listed buildings, among which are included the now disused stocks and whipping post. Oldest by far is St Mary’s Church which dates back to 11th century and houses the 15th Century 18 ft hanging font cover "said to be the most beautiful cover in the world”

All six of the Manor houses of Ufford no longer exist. The last, Ufford Place, was sold upon the death in 1956 of Major Eardley Blois Brooke and then later destroyed in a fire. Fortunately the gates and piers survived.