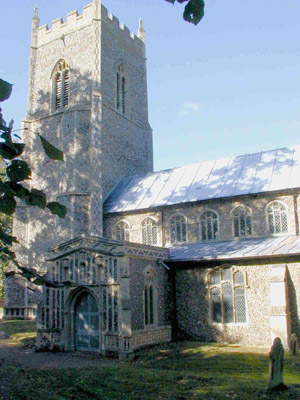 To discover what is happening in our church today please visit their web site at http://www.uffordchurch.org.uk

The Domesday book has no record of a church in Ufford, but the villages of Bromeswell and Bredfield are shown as having two churches each. From the appearance of the north wall of the nave with its very ancient herringbone courses of ironstone from the Suffolk crag, the massive round pillar and two half pillars of Caen stone in the south aisle suggests that these were built in early Norman times around the 11th century.

Built of flint and stone the original Norman church was 33 feet long, 23 feet wide and 13 feet high to the eves with an apse at the east end.

During the reign of King John, circa 1200, the chancel was added and a few years later, circa 1250, the nave was extended westward as indicated by the change from round to octagonal pillars. By around 1320 the great western arch indicates the nave had reached its present breadth and was joined to a tower at the western end. This was possibly the work of Robert de Ufford who held the Manor as a sub-tenant of Roger Bigot and whose descendants became Earls of Suffolk.

A further period of building commenced around 1450 with the completion of the tower and the addition of the south porch. The clerestory must have also been added around this time. In the latter half of the 15th century all the woodwork was added by the Willoughby family: the font cover, the fine chancel roof and the rood loft . The coat of arms of Sir Christopher Willoughby, who succeeded his brother as Lord Willoughby de Earsby in 1467, is evident throughout. It is likely that his close connection with the parson is the reason for the exceptional wealth of carved woodwork.

The nave roof is arch-braced, without collars and has hammer and tie-beams alternately. The chancel roof is unusual in that it is a arched-braced collar type but the arched bracing is intersected by pendants about half way up. Much of the original colouring is retained with the rafters and boards between having the sacred monogram I.H.S. and M.R., the cypher of the Blessed Virgin Mary. 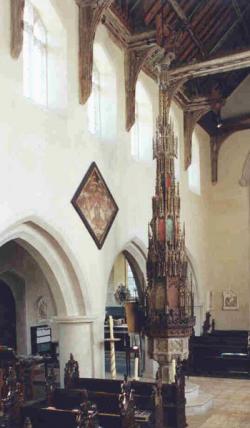 The magnificent font cover, described by H Munro Cautley as "the most beautiful cover in the world", dates from about 1450 and rises to over 18 feet above the font.

It rises in receding tiers of canopied niches, with image stools that formerly held statues, terminating in a carved pelican, the mystic symbol of Christ. Each niche is elaborately canopied with intricate pinnacles and tabernacle work. At the salient angles there are pierced and traceried buttresses with crocketted springing and converging ribs and the buttresses terminate in lofty pinnacles. The lower tiers of buttresses each contain a further canopied niche and little figure. The skill of the craftsmen is demonstrated by making the whole cover telescopic - the lower part sliding up over the upper tier.

Originally the whole cover was gilded and coloured, and even had gesso decoration but only indications of this original work remain.

During the English Civil War, William Dowsing was a puritan soldier and Provost-Marshall of the armies of the Eastern Association, responsible for supplies and administration. In 1643 he was appointed by their Captain-General, the Earl of Manchester as "Commissioner for the destruction of monuments of idolatry and superstition" to carry out a Parliamentary Ordinance of the 28th of August 1643 which stated that "all Monuments of Superstition and Idolatry should be removed and abolished",

On 21st August 1644, he visited the church but was so impressed with its magnificence he spared it too much damage. His journal gives the longest entry to Ufford describing the font cover “ There is a glorious cover over the font, like a Pope’s triple crown, a pelican on the top picking it’s a breast, all gilt over with gold”.